Landslides, caused by torrential rain, have swallowed part of the backyards of three clifftop properties on Auckland’s North Shore.

Large mounds of clay, bedrock and pohutukawa trees were visible in the muddy waters of the Torbay coast, after breaking off the cliff about 5am on Wednesday.

Sharon Rd resident Andy Fear said the landslides were so loud, he thought he was hearing a thunderstorm and couldn’t get back to sleep – so he decided to make a start on the day and go into work early.

“A little after 6 o’clock I had a phone call from my wife, she told me that there was no rear garden any more, unfortunately,” Fear said.

“I rushed home from work… and discovered that at least a section of three metres to 25m wide had actually fallen into the ocean, along with the fence and everything else. 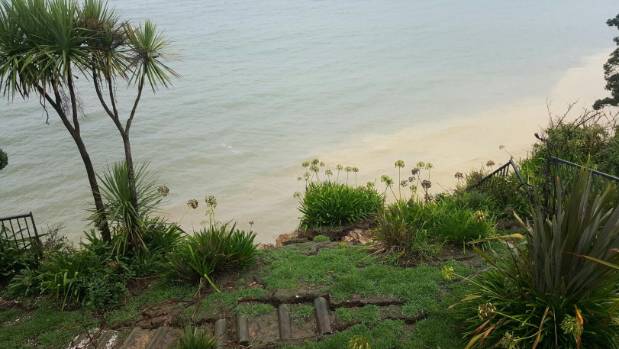 Fear’s back yard was left fragmented and cracked after a landslide swallowed most of it.

“It was very scary, and a far bigger thing than I envisioned when I got the phone call. The damage come closer to the property than I thought it would.”

The slip left his backyard fragmented, with “big cracks” he was told would eventually break off with future heavy rain and fall into the ocean also.

The Fire Service, police, council and geotechnical engineers visited his and his neighbours’ properties throughout the morning, to asses the damage and risk of further landslides. 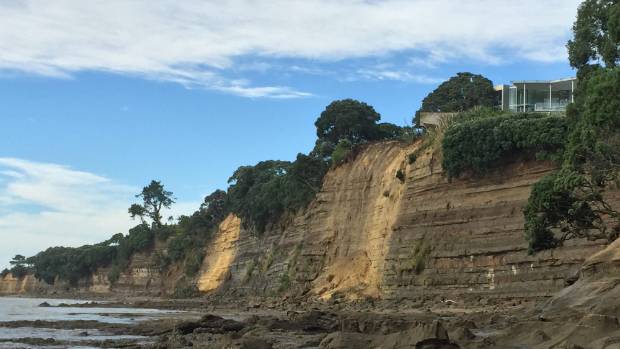 “Truckloads” of cliff have fallen onto the beach below, firefighters say.

“Their conclusion is that I am safe at this moment in time, and if it worsens, to get back in touch with them.”

Auckland Council’s Building Control Manager Weathertightness and Compliance Sally Grey said their structural engineers were satisfied the properties on Sharon Rd could remain occupied, but the situation would continue to be monitored until the rain clears.

She said the stretch of beach below the slips, between Browns Bay and Waiake Bay, would remain closed for safety reasons. 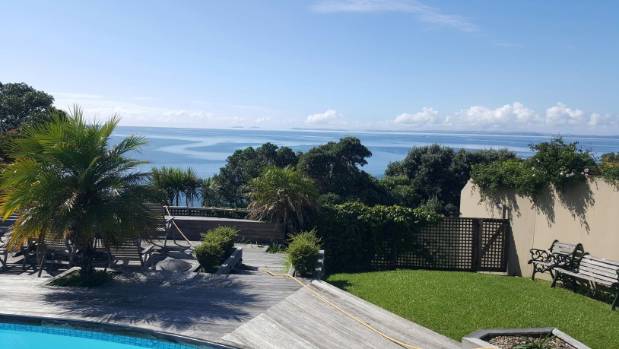 The view before the landslide – note the pohutukawa trees.

Fear’s back yard was also out-of-bounds, being cordoned off with police tape – cutting off access to his six free-range chickens in their coop, “Cluckingham Palace”.

“They’re probably feeling quite alone at the moment, [we have] not been allowed to go down there to see them.

“They are fed and watered at the moment, but we will have to make plans soon, I’m sure to go and evacuate them to better accommodation.” 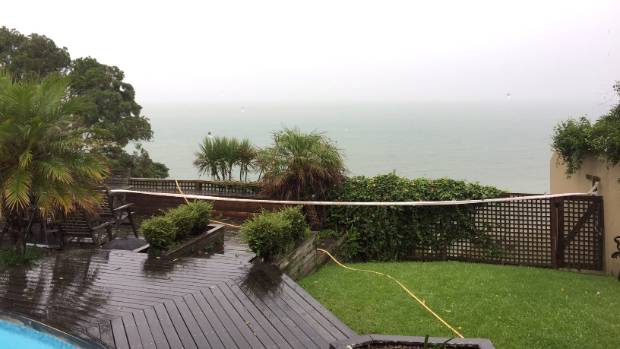 The view after the landslide.

The slip may have shaved several metres of the back of his property, but Fear said there was a silver lining, of sorts.

“We are now free of pohutukawa trees that were obviously a feature before – but now we have a great view.”